Konichiwa! Even if you don’t speak Japanese, everyone knows that the phrase is how you would greet someone in Japan. The Japanese culture has become one that us Malaysians are familiar with, with anime, the bon odori festival, J-pop and Japanese cuisine becoming part and parcel of our culture as well.

However, most of us are familiar with this due to our exposure to pop culture. There are many out there who miss out on learning about a rich Southeast Asian heritage simply because they lack the exposure to it.

Kartini (extreme right) hanging out with the children before the event

Our Didik-Kasih EduCare Program recipient, Kartini, realised this and decided to conduct her charity event at Sakae Sushi where 15 kids from Ruman Titian Kasih learn how to make sushi. Her charity project, which she organised as part of her programme requirements, saw the children learning how to make the traditional Japanese delicacy while learning about Japanese culture during a quiz session at the end of the event.

With the four volunteers from our charity as well as some of Kartini’s friends, games and quizzes were conducted before and after the highlight of the day, which was the sushi making workshop. While some children were not used to the taste of sushi, all of them enjoyed themselves as they learnt a new skill. Kartini personally echoed this sentiment. “The kids were happy making the sushi with the help of the team, who also enjoyed themselves,” said Kartini.

The children were equally as excited about making sushi, despite it being so distinct from other local dishes. “We haven’t made sushi before as we haven’t heard of it, and we are so happy to participate and learn about it at the same time!” said one of the kids in Rumah Titian Kasih. Volunteers watching over the children

The same goes to the volunteers. “The project is very good for children as they’re enjoying it, perhaps we should have another one!” said one of Kartini’s friends.

Kartini is able to give back to the community in this manner thanks to the Didik-Kasih EduCare Program that she is under. With the donations made to Rumah Titian Kasih, she has come full circle, from being a receiver of financial aid for her studies to giving back to those in need. Great Vision is open to new applicants for the Didik-Kasih EduCare Program for 2020. Click here or drop us an email at [email protected] to apply now. 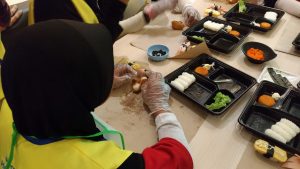 A girl shaping her sushi